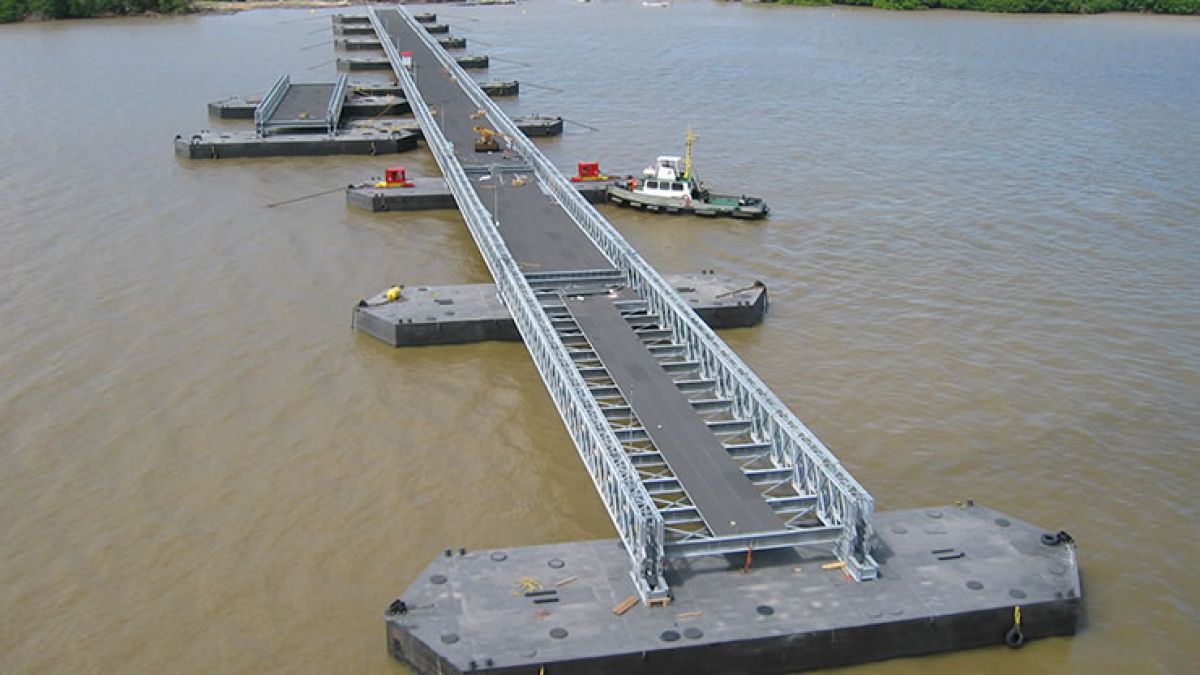 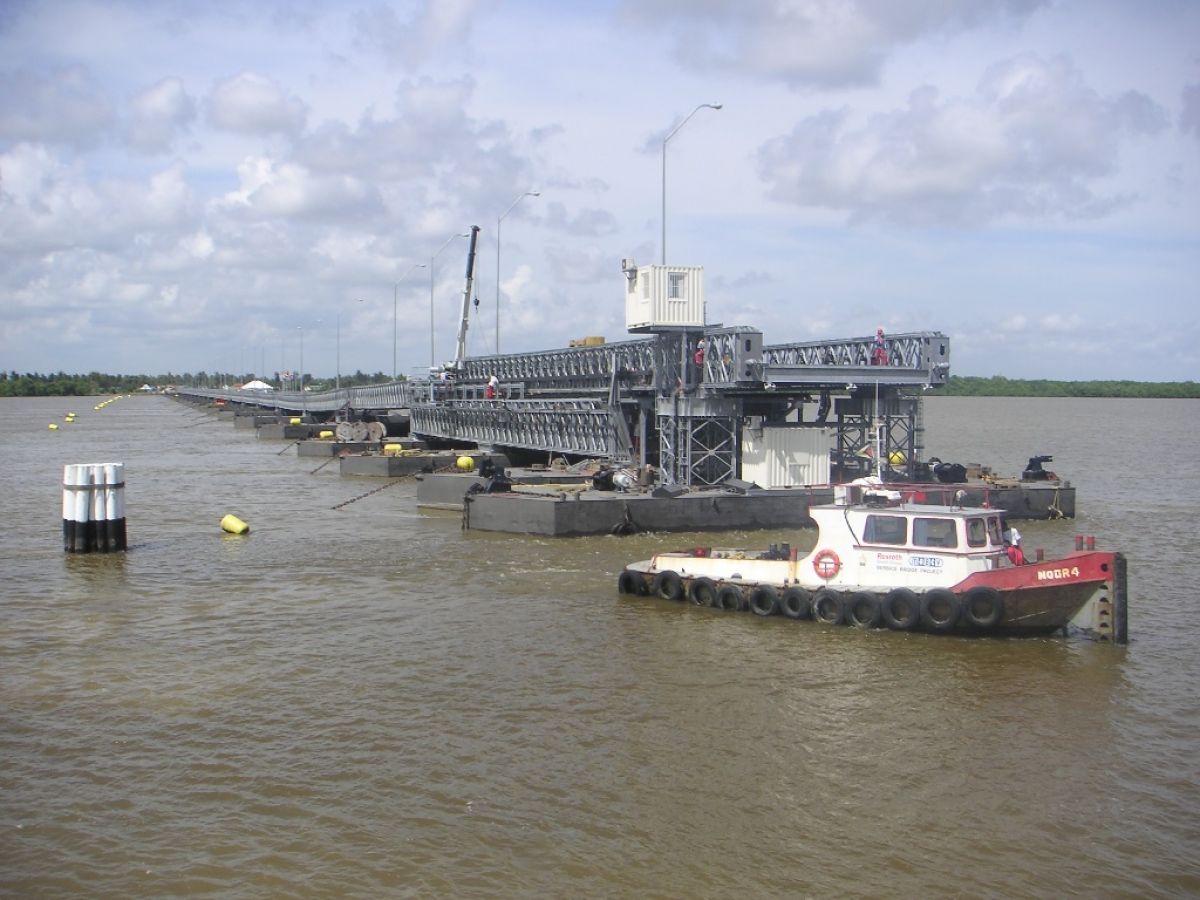 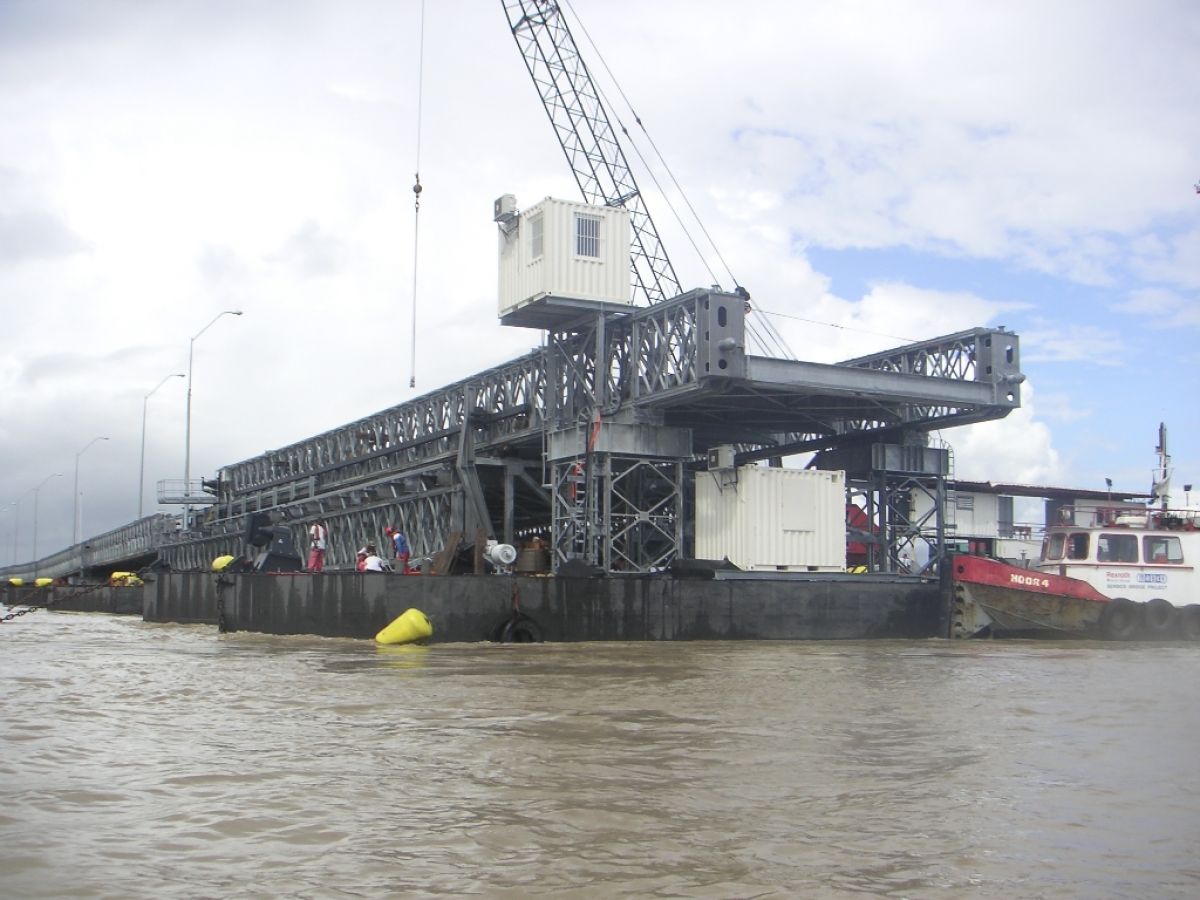 The Berbice River in eastern Guyana has for many years been an obstacle for communication, travel and trade between the capital, Georgetown and New Amsterdam, 62 miles away and farming communities beyond. It has also restrained trade within the country as Georgetown is Guyana’s main port, therefore efficient access to and from the city is vital. Traditionally, the river was crossed via a slow ferry service. When in 2003 the Ministry of Public Works & Communication asked the Louis Berger Group to conduct a feasibility study on bridging the river, it was agreed that a floating bridge would deliver the best solution. A consortium of Bosch Rexroth B.V. and Mabey Bridge secured the contract to design and deliver the project.

The Berbice River is wide and tidal at New Amsterdam. It also carries a lot of traffic, including large merchant vessels. The bridging solution therefore had to account for width, tidal rise and fall, and feature a mechanism for allowing both large and small river traffic to pass. It would also need to have the capacity to take heavy road traffic.

The floating pontoon bridge features 39 pontoons designed and manufactured by Bosch Rexroth, and a superstructure based on 37 spans of Compact 200™ bridging. The main challenge during installation was the anchorage for the pontoons due to poor ground conditions and tidal range. This was solved by using Suction Embedded Anchors.

The issue of allowing passage for large vessels was solved by using a four span Bridge Retractor System, whereby two rectractor spans of the bridge are withdrawn over two acceptor spans by means of electrically operated chain drives, opening up a 70m wide channel. This process takes just 8 minutes to open and close. However, it is unfeasible to use this technique for smaller vessels, so to allow passage of boats and smaller craft, the bridge features a high span section with an extra wide channel between two pontoons, providing an 11.9m high clearance over a 45m width.

The completed bridge is the sixth longest floating bridge in the world at 1,570m and provides a two lane crossing with anti-skid surfacing. In addition to the bridge, approximately 3.5km of roadway was built on the eastern side of the river and 0.8km on the western bank under a US$9 million Inter-American Development Bank loan.

Previously, crossing the river using the Berbice River Ferry Service consumed a great deal of time, estimated at an hour and a half for a distance of less than 2km. Average transit times were 45 minutes for pedestrian passengers, 90 minutes for passenger vehicles, and 120 minutes for commercial vehicles. However, this would be extended to approximately 3 hours at times. By comparison, crossing via the floating bridge now takes just 2 to 3 minutes. The bridge is currently under ownership of the Berbice Bridge Company Inc, and it will be passed to the Government of Guyana in 21 years. 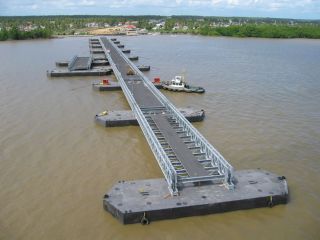 Our floating bridges are pre-engineered and utilise any number of spans, supported on intermediary piers or pontoons, to bridge a wet gap.