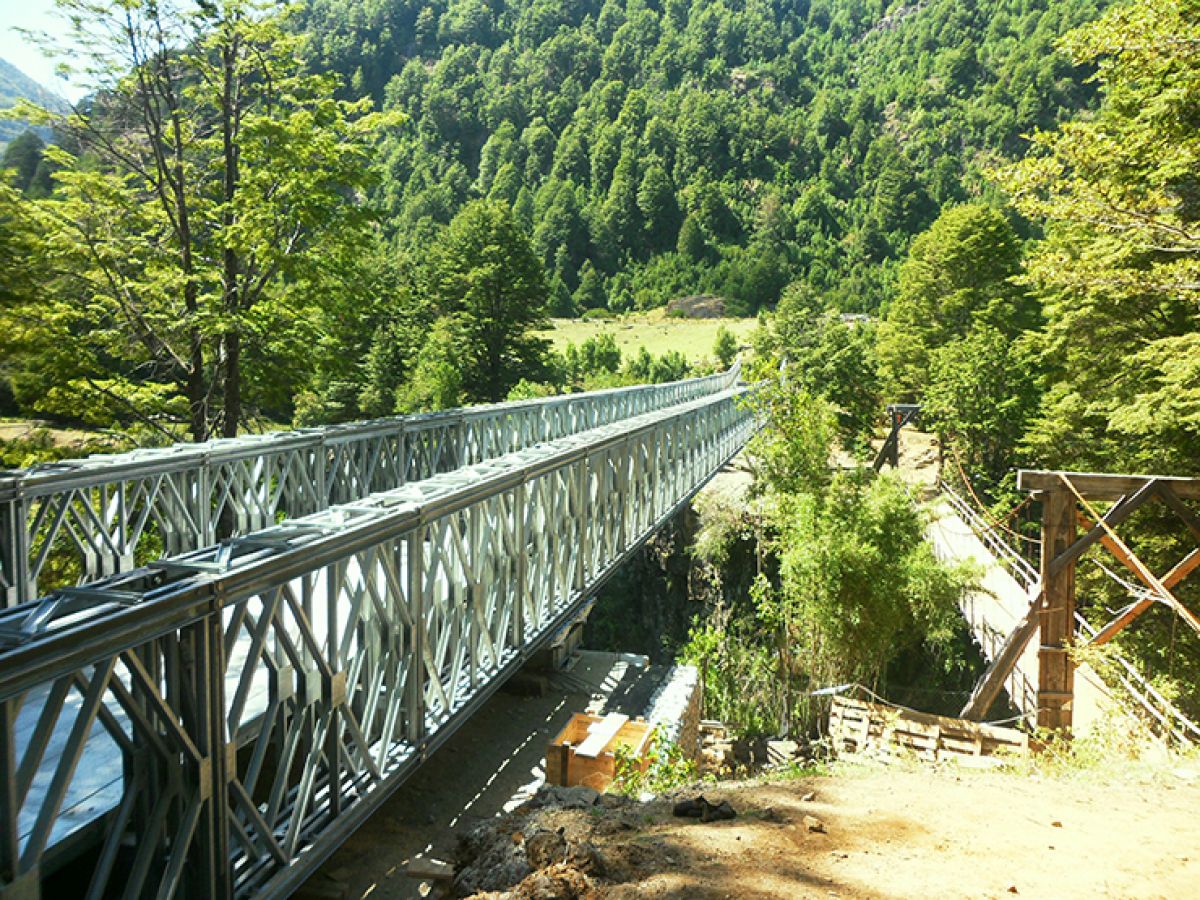 The Futaleufú River in northern Patagonia is known for its deep blue glacial waters and the whitewater currents that attract rafters and kayakers from around the world. However, infrastructure in the Los Lagos region is underdeveloped, and getting around is challenging for both local people and tourists.

With tourism increasingly important for the region, the Ministry of Public Works Los Lagos Región is embarking on a programme of improvements to roads and bridges. Included in the plan is the replacement of an old cable footbridge near Futaleufú town with a more substantial structure.

Empresa Constructora Baper S.A. won the contract from the Ministry of Public Works to build a 61m single-span modular steel bridge, access roads and abutments as a replacement for the cable footbridge.

Mabey Bridge has enjoyed a long and positive working relationship with the Ministry of Public Works, which holds a contigency stock of the company’s bridges.

The bridge site was particularly limited, with difficult terrain and an unlevelled, small construction area, just 50m x 8m, available. Additionally, there was no access for machinery on one shore.

The installation of the bridge was further complicated by extreme weather during the 10 days project: heavy rain and plunging temperatures at the start of the construction, and strong summer sun at the end.

A single lane, 3.15m wide Mabey Compact 200 was the bridge chosen for this project due to its ease of assembly and robust qualities.

The team installing the bridge comprised one site engineer, two foremen, a surveyor, a safety officer and ten labourers. Three of the unskilled workers had high altitude construction experience and one had previous experience in modular bridge building.

The 20-bay bridge was assembled under very tight conditions and launched over the deep ravine. On reaching the opposite bank, the launching nose had to be dismantled by hand in a confined area.

La Dificultad Bridge is by no means unique with regard to its remote and challenging location. However, Mabey Bridge has vast experience of such installations and the Mabey Compact 200 is delivering solutions in similar difficult circumstances around the world.

For three communities to the south-west of Futaleufú town, life has been made considerably easier by the installation of the La Dificultad bridge. On top of this, the tourism industry in the area, which is vital to the local economy, has received a boost.