Mabey Bridge was contacted to conduct a survey of a partially collapsed multi-span Bailey Bridge over the Ituri River, approximately 78km from the town of Bunia in the Democratic Republic of Congo. Experienced site advisors were immediately dispatched to carry out an assessment of the structure, which had collapsed when an overloaded truck tried to cross during the night.

It was recommended that the whole 124m long structure, which had been in use since 1949, should be replaced. The project was managed by MONUC (Mission of the United Nations in Congo) and funded by the British government. The bridge would cut short the 400km journey made by traders while the old bridge was out of action.

The replacement bridge selected for this crossing was a Compact 200™ bridge due to its ease of transportation and assembly, the simple and innovative installation technique, and the ability to achieve a long maintenance free design life. The new structure was to be fully galvanised and would reuse the existing foundations.

As Span 3 had collapsed and had become detached from the rest of the structure, it was cut free of the piers and the smaller Span 4 could then be easily de-launched.

The Compact 200™ was then assembled by the side of the river and connected to the remaining two spans using specially designed adaptor frames. A build and push operation then commenced to move the new structure into position. The bridge was assembled using a 4 tonne boom truck and launched by pushing the structure using a bulldozer. The old bridge was dismantled as it came clear of the gap and the new bridge was lowered onto new bearings.

All operations were carried out using local, unskilled labour along with the help of a contingent from the Nepalese and Congolese armies, and were overseen by a Mabey Bridge Site Advisor. The launching process was completed in just 12 days and the bridge was decked and opened to traffic.

The finished bridge is a permanent, single lane structure with two external footwalks. The overall length of the bridge is 124m, divided into four spans. The bridge was officially opened during a formal inauguration attended by the Deputy Prime Minister, Mr Emile Bongeli and the British ambassador, Mr Nicholas Kay. 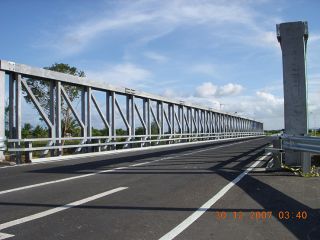 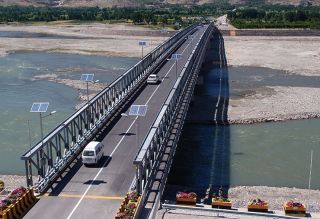