When the Burnay Bridge collapsed due to the excessively strong river currents and heavy rains of Typhoons Pedring and Quiel, it left several communities in the Philippines Province of Ifugao isolated. As well as being a vital crossing point, the bridge is the gateway to the scenic Banaue Rice Terraces, one of the top tourist attractions in the area. Ifugao is a major producer of rice and vegetables, which are transported to the main cities of Luzon along this route, so the loss of the bridge had a severe impact on the regional economy – the Provincial Local Government Unit in Ifugao declaring the province under ‘state of emergency’.

As a priority, the office of the President’s Bridge Program instructed CAR Regional Office and Ifugao 1st District Engineering Office to join forces to rebuild the bridge. It was essential that the bridge be replaced with a suitably robust structure, but as this would take time, an emergency detour solution was urgently required to allow commerce to continue during the new bridge installation.

A single-lane 52m long Compact 200™ was specified as the emergency solution and installed a few metres downstream of the destroyed bridge. The Compact 200™ is in widespread use across the Philippines and often used as emergency response to typhoons and earthquakes. The bridge was initially planned to span 36m but was extended during installation to ensure greater stability, due to soft materials in the existing abutments.

A 54m long, two lane single-span Delta™ was specified as the permanent replacement due to its robustness and ability to accommodate the load capacity of heavy goods vehicles. Several challenges during the installation were overcome, from ongoing bad weather and the rocky and mountainous terrain, to a shortage of local plant.

Thanks to the efforts of the installation team and the speed at which a C200™ can be installed, the emergency bridge was completed in just eight days – two days ahead of schedule. This meant the isolated communities and the all-important rice terraces were cut off for the minimal amount of time. Local people had expected a longer wait and had already started panic-buying, so the Compact 200™ was crucial in returning the local economy to normality. The permanent Delta™ bridge will serve the region for many years and will ensure the rice terraces of Ifugao remain open. 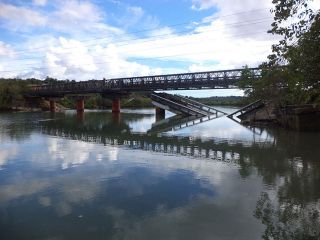